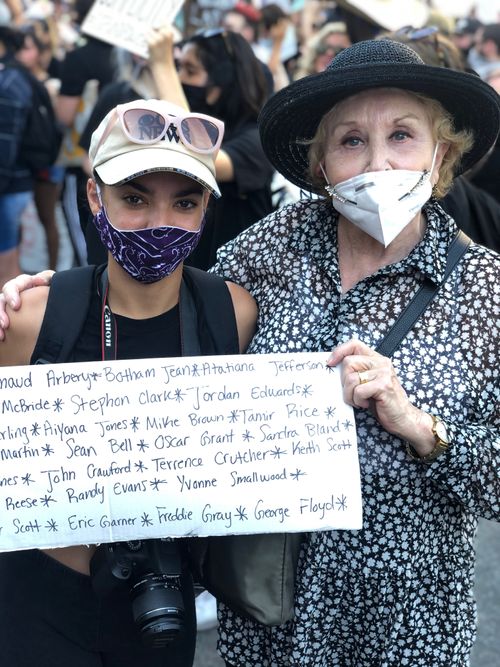 Last night something magical happened. It was as mighty as it was small. My daughter and I had been discussing that we felt disconnected from the George Floyd protests. My mother had been out earlier in the day, walking in protest with my niece, standing tall with their masks on, holding a sign together. My mother had bejeweled her facemask with rhinestones. At 81, it was the first time she had been out since the stay-at-home-order. She was putting herself at risk to be amidst others, but doing so in style. Which is her way. My niece looked proud and fierce, also behind her COVID mask. Last week I lost my job and have spent every moment since I got the news trying to muster up work. But it was time to join the ranks of peaceful protesters to take a stand against injustice. It was past the curfew and too late for a father and daughter to take to the streets. So my daughter suggested that we join the 9 day flashlight vigil at 9pm. I found my most powerful flashlight and we went out to our front driveway, just the two of us, feeling the lack of others to embolden a sense of solidarity. But we had each other and we were there to honor the life and death of Mr. George Floyd and the countless others like him that have suffered similar fates to police brutality. My daughter counted down to 9pm and I turned on our flashlight and cast it heavenward. The night was black save for our cone of light making its way through the pine trees into the unknown darkness beyond. No one else in our area seemed to be participating. An eternity passed before my daughter said we had hit the two-minute mark. The vigil would last another 6 minutes and 46 seconds before it would be over, the time it took for the killer to release his knee to George’s neck. Our hearts sickened and then we saw a flicker from a hill beyond. And then another. And another. Did someone turn on their outside lights? I turned my flashlight toward them only to be greeted with the same from across the hills. As we started to realize that the hills around us were aglow with lights of honor and protest, we began to realize that this tiny step was just the very thing that will see us through the pain of our current times. It was a peaceful act of unity and a reminder that sometimes you just need to go out in the dark alone and turn on your light to find the heartbeat of solidarity. At exactly 9:08:46 the night went black again. But for my daughter and I the curtain is up. We will peacefully protest over the coming months and years until we see change. Enough is enough. And no amount of military might will be able to take down the spirit of this movement. Godspeed George Floyd, you did not die in vain.