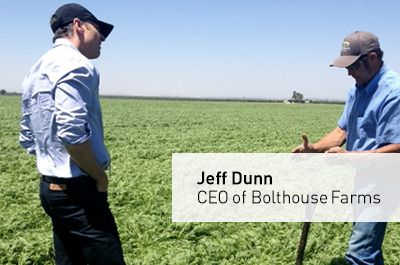 There’s a certain liberty that comes from having enough money to know your family is going to be OK. And perhaps you can afford even more daring when you know they’ll be more than OK, no matter how many people you piss off on your way to doing the right thing. Jeff Dunn knows a few things about that. He did well at Coca-Cola as the head of North and South America. But at some point in his mid life he realized that doing well wasn’t enough, particularly when doing well is at the expense of fellow humans.

Jeff Dunn is one of the most important people in the food conversation because he comes from the belly of the beast and he’s had a change of heart. He’s also super smart, arguably one of the best marketers in the industry, and has a clear vision for how we need to take back the health of the planet. As Dunn puts it, “It starts with reducing the amount of crap we consume in favor of eating more plant-based foods.” Easy for us west siders to embrace, a lot harder when your kids are hungry and you can fill them up for less than $5 bucks at McDonalds. The problem as Dunn sees it is that the whole junk food industry is subsidized. “McDonalds employees aren’t paid a living wage and need welfare assistance. That’s us paying for that inexpensive food. Then there is the obesity issue and the trillion dollar diabetes issue that will tax us even more.”

But food policy isn’t the solution. At least not in the near term. “Getting anything done in Washington takes too long. The USDA food bill (fact check) took 8 years to pass and it still hasn’t been implemented.” That’s why Dunn’s Farm Fresh Revolution is going to play out in the private sector. “Market fruits and veggies like junk food and suddenly they appeal to kids. Fruits and veggies are outgunned 100 to 1 in terms of ad spending to target kids. Of course we’re not winning the war. Yet.” Recently, Dunn worked with the White House and Sesame Street to make their characters available to produce manufacturers for marketing. It’s a great example of how he thinks. Use Washington influence to get things done. But hopscotch gridlock by using the marketing might of a multi billion-dollar industry to influence behavior. In a stunningly glorious show of irony, the Sesame Street press announcement was set to take place in the White House vegetable garden in October of 2013, but was delayed due to the Washington shut down. But that didn’t stop Dunn. On November 1st a pretty remarkable alliance was announced between the White House, Sesame Street, and the produce industry:

Michelle Obama announces that the Sesame Workshop will let the produce industry use Elmo, Big Bird, and other furry 'Sesame Street' characters free of charge to market fruits and veggies to kids.

and furthers the meta mission of his Bolthouse Farms: get people to eat more fresh fruits and vegetables and you radically improve the health of the planet while reducing the paralyzing costs of treating preventable disease. “I used to work for a company that hauls in $5 billion a year making fat and is lauded for donating $100 million to reduce it. The math equation is insane and ultimately taxpayers will pick up rest of the bill on that one.” Dunn says, “You can’t change the system from within. You have to play like an outsider.”

That Dunn and his team, working with Sam Kass, Assistant White House Chef and Food Initiative Coordinator at the White House, were able to pull of getting one of the most iconic family programs in history to “donate” the use of their characters to promote healthier eating is testament to Dunn' gamesmanship. Kass is a champion of sustainable farming and locally grown, organic foods and is a critic of modern agricultural practices that rely heavily on synthetic fertilizer and pesticide inputs. Its nice to have friends like Kass in the White House, especially when you want to change the food system.

“Its not hard to see that the three major issues on the planet right now are water, food, and energy. Across all three, our current practices aren’t sustainable.” Dunn is doing his part with Bolthouse and the White House on the food front. We can only hope that there are equally brilliant crusaders on the water and energy front fighting the good fight. Otherwise we may just have to move Dunn from Bolthouse to the White House.

now are water, food, and energy. Across all three, our current practices aren’t sustainable.” Dunn is doing his part with Bolthouse and the White House on the food front. We can only hope that there are equally brilliant crusaders on the water and energy front fighting the good fight. Otherwise we may just have to move Dunn from Bolthouse to the White House.