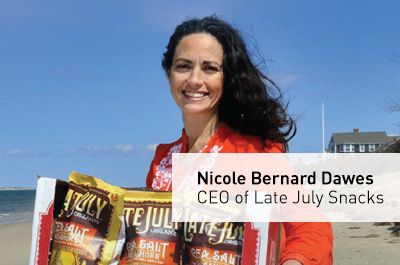 The CEO and founder of Late July Organic Snacks shares the key to winning the war on junk food.

I started my chat with Nicole Bernard Dawes, CEO and cofounder of Late July Organic, by asking the annoying and probably sexist question, “How do you balance being a mom, having a family, and running a company?” In all my interviews with men, I don’t think that question ever even crossed my mind. Nicole’s answer was instructive. “I never had a nanny. I work with my husband and the kids came to work with us until they were 3. Now we take time out of the day to go get the kids at school and 6 o’clock family dinner is something we do almost every night.” As a fellow CEO, I think that’s impressive. I can’t remember the last time I came home for a 6 o’clock dinner.

Family and food seems to be the inspiration and the purpose that drives Late July. Nicole laughs as she recounts how it all began. “Mom had a natural foods store. It was horrendous. Depressing looking food that tasted like cardboard.” It was the late 1970’s. Health food stores and co-ops were the early food-system rebels of a movement that has finally begun to take hold. Hats off to them all. But the food was deliriously unappetizing. “Food is a positive and powerful choice that can influence the world, but I knew we weren’t going to get there if we stayed stuck in my mom’s health food store.” Late July is one of the great companies that believes healthy organic food can actually taste better than the junk food alternative. It’s also a lifeline to parents combatting the billions spent on junk food advertising that makes ‘bad for you’ seem so appealing to our kids. Late July snacks not only taste delicious, they look as appetizing as their junk food brethren. That’s key to winning the war. And I should know. At TR we stock healthy snacks at the office for the employees to help make the healthy choice the easy choice, and all of the Late July snacks are always the first to fly off of the shelves.

Nicole believes that transparency will radically change the food supply chain in favor of organic within the next 20 years. “Organic folks care so much about the environment, animals, and health. The organic industry holds itself to the strictest standards in the world and probably polices itself more than any other as well.” Seems like an unfair fight when the competition cares only about flavor and profit. But Late July is proving that consumers do care about where their food is coming from. In a free market society, that’s where the conversation begins to get interesting. Chipotle has built a dynasty on the premise that millennials care plenty about where their food is coming from. The Chipotle Scarecrow video on this subject has more than 12 million views on YouTube. Nicole is hopeful about the millennials too. A generation that was once the great hope for enlightened consumerism is now actually buying Late July for their kids. And what of the kids growing up on Late July Organic snacks? Are they an even more aware generation? “My kid would spontaneously combust if he didn’t recycle,” says Nicole. “It took 20 years to change that behavior. The same thing will happen with organic.” In a world where transparency is driving good behavior from companies, it’s also rewarding authenticity in brands. Nicole is a second generation food rebel. “My job will be done when the non-GMO tortilla chip is the best selling chip.”

She may be at it for a while before she sees that day. That’s OK. When who you are is at the center of what you do, consumers can feel it. And that’s what makes great brands that create enduring change.