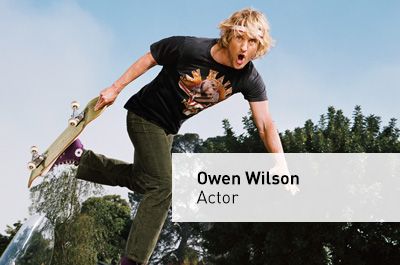 With his boyish good looks and mellow style, Owen Wilson is one of Hollywood’s most sought-after stars. Whether he’s playing an astronaut, a cowboy, or the animated race car Lightning McQueen, he’s always Owen—transparently good-natured and effortlessly authentic, traits that endear him to the audience that loves him most—Millennials.

I sat down with Owen for the celeb’s take on everything from his first car to TrueCar. What emerged was a sometimes scattered but wonderfully illuminating mix of quirky insights and Zen-like wisdom.

Find out why, as the new voice of TrueCar, Owen speaks for the next generation of car buyers.

Lucas: Hey, Owen. Thanks for making this happen. I know you’re often in exotic places doing amazing things, so I really appreciate you giving us this time.

Lucas: In American culture, we have this love affair with the open road—the promise of it.

Owen: You know, it’s a big rite of passage, when you get your driver’s license… you get independence… freedom. I think kids still have that belief. It’s something that’s uniquely American, that kind of love of the open road. And it also speaks to the very American idea that you’re free to invent yourself. And that’s the promise of this country: the pursuit of happiness. I think a big part of that pursuit is the open road—it’s how you get there.

Lucas: Well, then, what about the car itself, the automobile, the fascination you have with it?

Owen: As a kid, my friends and I would be cruising around the neighborhood on bikes, fantasizing about being able to drive. I remember one kid had a Lamborghini/Jeep on his list, and everyone put that on theirs too. It covered the really cool things of a Lamborghini but had the usefulness of a Jeep. That also freed you up to still have the Porsche and the Mustang and the Corvette.

Lucas: Tell me about your first car.

Owen: My first car was a Chevy Blazer that my dad got me. And that feeling, seeing it in the driveway, it’s definitely a top 10 of exciting days in your life—when you get your first car.

The first car that I got after I’d worked on a couple of movies was a Porsche. And I remember that my younger brother wanted to get a Porsche, and that was really his big thing. And then, I just got one. He said, “But that’s the car I’m gonna get.” And a couple of months later, he got one. And so perhaps it seemed obnoxious because we were living together in Los Angeles, Porsches parked identically, literally identical cars. That was the first really exciting car that I got.

Lucas: Were there any cars that influenced you?

Owen: Growing up, watching Steve McQueen in Bullitt. And that gold Camaro that Jim Rockford drove—I remember my dad getting one of those and being really excited. Bruce Springsteen singing about a Cadillac. Harold and Maude getting that Jaguar and turning it into a Jaguar hearse. Or the Alfa Romeo that Dustin Hoffman had in The Graduate.

Lucas: In each of those films, the cars became a symbol for the characters…

Owen: Magnum, P.I. and his red Ferrari. Yeah, the cars became linked with the character in your mind.

Lucas: Okay, let me shift a little bit and talk about getting the car. TrueCar’s mission is to prove that truth and transparency are actually a more profitable way of doing business—the business of buying cars. Any thoughts on that?

Owen: Well, I know that as much as people love cars, the idea of buying one—because it’s a big-ticket item—can create anxiety. So I think when there’s something that reassures people they’re getting a good deal, that simplifies things for the Dealer and the buyer… that makes the experience a positive.

Lucas: That is so the promise! A good experience actually grows the market and creates more revenue, more profitability.

Owen: Because then people enjoy it, seeing it as something that feels as good as actually having a car.

Lucas: Exactly. So, tell me about Millennials. You’re so popular with that generation, and they’re starting to have kids now. What’s your sense of them?

Owen: They’re very big on transparency, knowing that things are fair. With Twitter and social media, when you get a reputation with Millennials for being fair, it’s really gonna work well for you.

Lucas: One last question… about your son telling his friends that his dad was a car… I just love that story.

Owen: As a little kid you play with Hot Wheels, so cars get into you very early on. That’s why it’s funny that I got to end up playing one. Because I also got to play other things most boys think they wanna be—an astronaut in Armageddon, and a cowboy in a movie. And then a wish fulfillment by playing