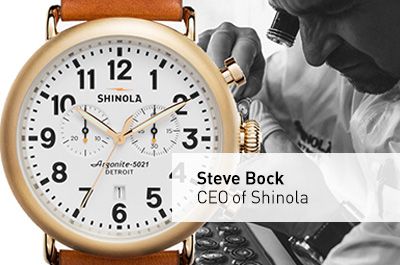 I was sitting with my car friends the other day at lunch. They had just returned from the Detroit Auto Show. Being died-in-the-wool car guys, they know Detroit well. I asked them how the resurgence of the town was going. “What resurgence? Detroit is bankrupt.” I was interested in this subject because after my conversation with Steve Bock, the CEO of Shinola, one of America’s most interesting emerging brands, I heard quite a different version of what is happening in Detroit. Shinola is a maker of vintage watches, leather goods, and bicycles that honor the traditional American craftsmanship that made Detroit a mecca of industry during the turn of the last century. The Shinola headquarters is in downtown Detroit (name bldg.) and they have a vision for a way to make high touch manufacturing a darling of retail that also puts people back to work making products they are proud to stamp their initials on.

It is a countercyclical move in this digital age of hyper-connectivity. But it is making fast friends with consumers that can afford the finest watches on the planet. As well as those that can’t. “Our customers appreciate that our products are hand crafted. We’re using the same quality watch parts as brands that charge three times as much as ours. We’re just not using celebrities and high cost advertising, so we can pass that value on to our customers.” The strategy of Shinola is to make its employees the celebrities - the hard working, high skilled, craftsmen and women that have become a casualty of the post-industrial age. “We want to give people more than jobs, we want to give them careers.”

Steve is quick to remind me that his march is slow. While Shinola, to its fan-base, is revitalizing Detroit by storm, the truth is they have imperceptibly impacted the job force there. Ford and the comeback of the car companies are having a much bigger impact in terms of total job count. But Shinola is doing something different. It’s building a company amidst the ruins of a great city to celebrate a lost art, craftsmanship. I believe it was the futurist Faith Popcorn that said, “Trends are easy to predict because they start small and get bigger.” Ironically, Shinola is following what Henry Ford once did, they are building great machines that their workers can afford. And would be proud to own. I’m also seeing the Panerai-watch-wearing-elite now sporting Shinola watches. It’s not easy to unseat a Panerai at a fraction of the cost. It’s like winning Indy with a 400 horse power engine. But that’s what great craftsmanship can do.

To my automotive friends that dismiss Detroit as a bankrupt city, maybe they didn’t catch Eminem’s Superbowl spot for Chrysler that branded Made in Detroit as an elevation to Made in America. “Build and destroy.” So we can build again with even more heart. We love that in America. Time marches on in Detroit and its next generation of great industrialists will be the designers and re-inventors who will raise a renaissance from the ashes through ingenuity. Shinola is just getting started. We love their honesty, how they honor their workers as heroes, and the incredible watches, leather goods and, my personal favorite, the ridiculously amazing Runwell bicycle. Congratulations Shinola, for reminding us that zeros and ones will never replace human-made.

You feel it in the design - the function and the quality. It matches the same kind of thirst that is driving a return to vinyl records among the millennial generation. I was in our kitchen here at the agency and a group of 20 somethings were talking about the richness of analogue sound. The imperfection that puts a coveted human touch on music, art, and in the case of Shinola, industry.